view of Mt. Everest flying from Paro to Kathmandu

The Himalayas are overwhelming in magnificence. The beautiful mountain ranges also provide us with a humbling perspective- by realizing how small and insignificant we humans truly are. The Roof of the World is home to eight of the ten highest mountains on our Earth, with Mt. Everest being the highest. Adventurers look at the Himalayas to challenge themselves to climb the highest peaks and others look at a Himalayan journey as the ultimate spiritual destination.

The word “Hima” in Sanskrit means snow, and “alaya” means abode. This abode of snow is also considered to be the abode of the gods and the source of primary river systems providing the life force for millions and millions of people along the Indus, Ganges and Brahmaputra, the Yangtze and Mekong. Dotting the foothills are countless temples and shrines honoring a spiritual connection where myths and legends form the foundations of cultures in Asia.

These pages offer a few links in a universe of endless possibilities but hope you may find some interesting connections.

See below for Bhutan

Click on Links below for:
Dharamsala
Ladakh
Nepal including Lumbini and Buddha’a Path

A Buddhist Kingdom tucked away in the eastern Himalayas, Bhutan was at one time, one of the most isolated countries in the world. Reflecting deep cultural roots and Buddhist spiritual values, the Bhutanese treasure their natural environment. Bhutan is also home to some of the most exquisite textiles- a feast for the eyes each day as locals wear their beautiful kiras (for women) and ghos (for men) each day.

Visiting Bhutan is a transforming experience beginning with an unforgettable Druk Air flight descending through the valleys into Paro. Although there are more curves in the roads than anywhere else on earth, the driving (for the passenger!)  can also become a meditation passing Dzongs and fluttering prayer flags with prayer wheels chiming their blessings. 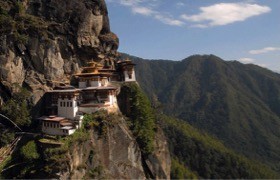 Once the engines have shut down after disembarking the aircraft at Paro airport, it is wonderful to feel the silence of gentle winds. It is best to spend some time acclimating before any long drives. The Paro Dzong and a visit to the National Museum offers an excellent introduction to Bhutan with antique thangkas, textiles and historical artifacts.

Kyichu Lhakhang is also easily accessible. Dating back to 7th century, this is one of the oldest and sacred shrines of Bhutan.

Tiger’s Nest:
is a highlight of Paro Valley, however this trek is best left for a last day before flying out when you are most acclimated.

Tiger’s Nest is where Guru Rinpoche, or the Padmasambhava meaning the Lotus born Buddha and 8th century saint from India, descended on the back of a tigress to sudue demons and to bring peace. The legend tells the tigress which Guru Rinpoche rode upon was actually his favorite consort, Yeshe Tsogyel who was transformed into a tigress for this journey. After Guru Rinpoche meditated in the cave, he instructed the Taktsang monastery to be built which is situated on a vertical granite cliff about 3,000 feet above the valley. A 1.5 hour hike will bring you to a viewpoint with a teahouse where refreshments and meals are available. Another approx 1.5 hike now allows visitors to reach the monastery. Taktsang monastery is a place Bhutanese pilgrims wish to visit at least once in their lifetime.

Thimphu, the capital is 60km or now less than two hours drive from Paro, partially on a new highway. Catching up with the modern world, Thimphu now has one traffic light to deal with the growing number of cars. It is interesting to get a feel of the administrative center of Bhutan The National Memorial Chorten was built to honor the late 3rd King, Jigme Dorji Wangchuk and in the mornings is when a stream of locals come to pay respects. It is also interesting to visit the Textile Museum and the School of Fine Arts. Also, the Hospital of Traditional Medicine and have fun seeking out stamps at the post office. Be sure to see if a game of archery, the national sport of Bhutan, is taking place. It’s fun to watch the scoring team break out in song and dance. There is also an interesting weekend market.

Tashichho Dzong of Thimphu is another magnificent structure and a short drive further at a lovely sanctuary, you can catch a glimpse of a takin- Bhutan’s beloved national animal which looks like a cross between a moose and a gnu.
Beyond Thimphu will bring you to Punakha Valley and if your time permits, it is very worthwhile to venture further to Central Bhutan and the valleys of Bumthang. For the more adventurous, a journey to the far east of Bhutan brings you to more rugged territory and home
to extraordinary weavers.

Punakha Valley:
From Thimphu approx 2.5 hour drive brings you to the Dochu-la Pass at 3050m and then a decent to 1300 meters- the temperate Punakha Valley.
Punakha Dzong is another special highlight. Situated at the auspicious confluence of the Mo and Po rivers, Punakha Dzong was built in 1637 by Shabdrung Ngawang Namgyal who was the great unifier of Bhutan. Following conflicts with other lamas in Tibet, the Shabdrung fled to Bhutan on a pilgrimage bringing with him sacred Buddhist relics now safely tucked away in Punakha. During the tsechu festivals, legends are retold in performances and to witness the unfolding of the sacred thongdrol cloth (a huge thangka) at first light is believed to be one’s total purification and liberation. However a visit to Punakha Dzong at any time seeing the life-size statues of Guru Rinpoche, Shabdrung and of Gautama Buddha will fill hearts with respect and peace.

Phobjikha Valley:
an expansive glacial valley and stunning area where black necked cranes migrate from Tibet in November. Here you can visit the centre of RSPN- Royal Society of Preservation of Nature. The Phobjikha valley is also the home to the impressive Gangtey Goemba Monastery.

Trongsa is the town with Bhutan’s largest Dzong. Initially built in 1648, Trongsa Dzong in later years became the seat of the most powerful governor who united Bhutan. The first and second Kings ruled from Trongsa. The current and 4th Druk Gyalpo of Bhutan, Jigme Khesar Namgyal was coronated in Thimphu in 2008.

Bumthang: consists of four valleys: Chumey, Choekor, Tang and Ura and is a main religious center of Bhutan. Entering Bumthang at Chumey valley, you drive through wheat and barley fields and beyond the Yutong La Pass (3400 meters) descend into the main town of Jakar in Choekhor Valley (2580 meters).

The Jakar Dzong towering above the town means Fortress of the White Bird. Guru Rinpoche came to this valley to meditate and left his body print inside a cave behind the temple complex of Kurjey Lhakhang. Jakar is also home to other precious temples such as the Jampa Lhakhang one of Bhutan’s oldest temples dedicated to the Maitreya Buddha of the Future. Built by Tibetan King Songtsen Gampo in 7th century and along with Kyichu Lhakhang in Paro valley, it is one of 108 temples built throughout the Himalayas to suppress a giant demon.

The Tamshing Lhakhang, founded in 1501 is where teachings of its founder, the saint Pema Lingpa still continue today.

Ogyen Choling is the ancestral manor home of Kunzang Choden Roder, a prolific writer and story teller, author of Circle of Karma, Tales of the Yeti, and a book on Bhutanese food and riutal called Chili and Cheese.

The history of Ogyen Choling

Kunzang explains the history of Ogyen Choling begins with the visit of a great Tibetan master of Buddhism, Longchen Rabjam (1308-63). He is the most celebrated writer and philosopher of the Nyingmapa School of Tibetan Buddhism and is regarded as the synthesizer of the doctrine and methods of Dzogchen, ‘School of Great Perfection’. Oral tradition explains why the great master chose the location for his centre. Looking up from the valley towards Ogyen Choling with the Kanyai mountain to the east, the panoramic view is that of the shape of an elephant’s head. The elephant in Buddhist iconography is auspicious and it has many meanings; it is the vehicle of some Vajarayana Buddhist deities and because an elephant can live up to a hundred years it also symbolizes posterity. A few hundred meters above the village, climbing towards the crown of the elephant’s head is a cave which is to this day revered as the meditation cave of Longchen Rabjam.

This place with its special physical features and blessed by the presence of Longchen Rabjam, later became a center of the Tibetan saint Dorji Lingpa (1346-1405). Dorji Lingpa is one of the great tertons (Religious treasure discoverer) of the Nyingmapa school and also a master of the Dzogchen teaching in the Bon tradition. Ogyen Choling is regarded as Dorji Lingpa’s center and the descendants of the saint have not only borne the responsibility of upholding the religious tradition, choeju, but also the genealogical lineage. The families of Ogyen Choling had the status of Lama choeju or “religious nobility”. The best known historical personality of this lineage is undoubtedly Tsokye Dorji who was the fifteenth generation descendant of Dorji Lingpa. He was the Trongsa Penlop or “governor of Trongsa”. In 1853 he handed over the post of governorship to Jigme Namgyal (1825-1881) the father of Ugyen Wangchuck (1862-1926), who in 1907 became the first hereditary monarch of Bhutan.

The ancestral temples at Ogyen Choling house exquisite mural paintings and mandalas. Chapels are dedicated to Tara and to Dorje Sempa- the Boddhisattva of ultimate reality.  Kunzang and her daughter have put a lot of work and love into creating a museum at Ogyencholing where one can learn about traditional Bhutanese life. The Ogyencholing Trust Fund helps support the restoration and maintenance of this special place and also provides financial support to deserving local students to pursue continued education.

Some visitors find their way here on a day-trip from Jakar, but it is very worthwhile to spend a night or more at this precious place. There is a rustic but very cozy guesthouse.

All travel arrangements to Bhutan must be secured in advance through a local Bhutanese tour operator who will secure flights to Paro and the visa to enter Bhutan.  Paro is the only international airport.

Overland travel from/to India is possible at the Phuentsholing border in western Bhutan.

There is another border crossing from eastern Bhutan into Assam, but only for exit- not an official entry for tourists and the border may be closed at times.

For visitors besides residents of India, it is mandatory to fly one-way, either in or out of Bhutan.

There is a minimum daily tariff to visit Bhutan ranging from USD 200-250 per day depending on the season and must be pre-paid. This will include a full-board package including your local guide and transport, accommodation in 3-star hotels. Newer 4 and 5-star hotel properties are subject to supplement charges. Airfare into Paro and Visa fees are not included.

A sustainable tourism Royalty of USD 65 per day is included the daily tariff which goes towards free education, free healthcare, poverty alleviation, along with the building of infrastructure.

Festivals (tsechus) mostly take place in either Spring or Fall and are very popular with visitors. It is worthwhile to check out the festival dates in planning your journey.

Accommodations are usually secured according to availability by your local Bhutanese host.

Below are a few links to recommended accommodations you may wish to request. Some may be subject to supplemental charges.

Flying into Paro from Bangkok, try to get a seat on the left-hand side of the plane which usually allows you to have a view of Mt. Kanchenjunga or Chomolhari.  Flying between Paro and Kathmandu and Delhi, you may have a great view of Mt. Everest.

Odyssey Guide Bhutan by Francoise Pommaret is a must for any visitor to Bhutan and can be ordered on amazon.com or  www.longitudebooks.com

The coronation of King Jigme Khesar Namgyel Wangchuck was in November 2008.

Link to some stunning photos: www.boston.com/bigpicture/2008/11/bhutan_crowns_a_new_king.html